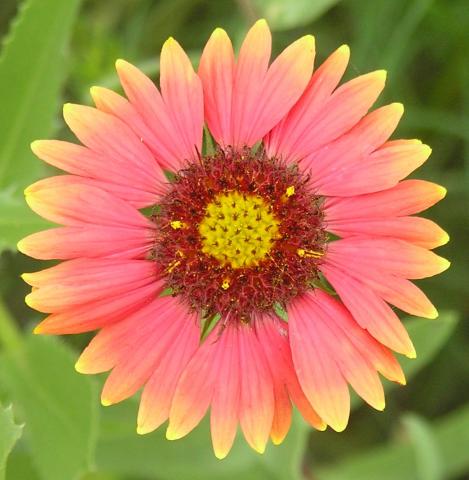 In my last post to Garden Notes, The Gardening Year 2013, I stated I didn't know whether 2013 was a hotter, cooler or average year, heat-wise. I stated that the weather reporting station at Amarillo International Airport recorded 10 days with temperatures at or exceeding 100° and 12, 13 and 9 days under 90° in June, July and August respectively. The National Weather Service tracts a good deal of weather data, but neither of those two categories are tracked in that manner.

The weather service keeps tracks of the average days above 90°, and the averages are 14, 21 and 17 for June, July and August. We can't do an actual comparison of numbers, since days where maximum temperature reached 90° would not be included in either. So I went back to the data.

Rather than go back and include the number of days where 90°+ was the maximum temperature, I have focused my attention on a stat of interest to gardeners, the

AHS Plant Heat Zones. We are all aware of the USDA Plant Cold Hardiness Zones, but heat affects a plant's survivability too. The heat zone map was introduced by the American Horticultural Society in the late 90''s-early 2000's, (the AHS Plant Heat Zone Map is copyrighted 1997). The map divides the United States into regions based on the number of "heat days"-- temperatures over 86 degrees – it experiences. Eighty six degrees F is “the point at which plants begin suffering physiological damage from heat”.

“The effects of heat damage are more subtle than those of extreme cold, which will kill a plant instantly. Heat damage can first appear in many different parts of the plant: Flower buds may wither, leaves may droop or become more attractive to insects, chlorophyll may disappear so that leaves appear white or brown, or roots may cease growing. Plant death from heat is slow and lingering. The plant may survive in a stunted or chlorotic state for several years. When desiccation reaches a high enough level, the enzymes that control growth are deactivated and the plant dies. That is the point at which plants begin suffering physiological damage from heat.” (AHS Heat Zones.)

The American Horticultural society goes on to say that there are many other factors that can affect, both positively and negatively, the ability of a plant to survive heat, chiefly the extent a gardener provides for the general needs of any individual plant. So all is not lost when it gets hot. For that reason, this is why we don't have a wholesale die-off of heat sensitive plants during the heat of summer months. However, gardeners do experience heat related die off among their plants from time to time, depending on the severity and duration.

Maximum daily temperature data from the National Climatic Data Center was analyzed from 1974-1995 for most areas of the country in compiling the heat zones. The zones range from Zone 1 (less than one heat day) to Zone 12 (more than 210 heat days). Amarillo and most of the Texas Panhandle falls within Heat Zone 8, 90-120 days in which the maximum temperatures reaches 86° or higher.

I could find no reference in climate data that summarized this critical point of 86° for the years since 1995. Therefore, I studied monthly records from 1996 to 2013 to see if Amarillo was still in AHS Plant Heat Zone 8 region. To simplify matters, I included 1994 and 1995 to work with two decades of data, then compared the last 10 years to the previous 10 years to see if our area has been cooler, warmer or on average.

My initial interest was in learning how many days reached and exceeded 86° and what was the average number of days over these two 10 year periods. I wasn't able to find our specific data for the average number of days used in compiling the heat zone map back in the 1990's, however, one could access this data from the national Climatic Data Center and calculate that average for 1974-1995 by going through the records month by month, year by year, as I did for 1994-2013. One point that became immediately clear as I scanned the months and years of temperature data was the great temperature fluctuation between years, between months, and weeks.

Important to note, there were no heat days recorded during the months of January, February, November and December for this 20 year period. March averaged one heat day, April and October averaged 3, May-11; September-13; June-20; August-24 and July experiences the most heat days with an average of 27.

Still Lots of Variability in Heat

Just like peppers, there is a lot of variability in heat from one month to the next. Were the heat days just in the upper eighties, the nineties or topping 100 degrees? 86° degrees is hot and begins the damage in heat sensitive plants, but not that bad, really (when one is used to it). In scanning the daily and monthly temperatures, some months seemed on a seesaw up and down. Only 5 months recorded heat days every single day of the month during the 20 year period, 3 of the months in July, 2 months in August.

Once the temperature reaches the century mark, I don't know what 100° heat does to plants, but my cells seem to melt. During 1994-2013, the Amarillo weather

So, 2013 was exactly average by reaching the century mark on 10 days, however, taking our 2011's fifty century days and recalculating for 19 years, the average is slightly under 8 century days a year. With that in mind, the Amarillo area experienced more than average century days.

On the cooler side, two of the six years that fell within Heat Zone 7, also experienced no century days. However, two of those cooler years also recorded 10 days each in which it reached the century mark.

But looking at the numbers and comparing them for the cool, average and hot years (corresponding to AHS Plant Heat Zones 7, 8, and 9), it is easy to see that some years are distinctly cooler, average and warmer. Often, we can only determine this towards the end of the year. Some years can start out cool, average or hot, but end up differently, overall. In the past 20 years, there were six Heat Zone 7 years, 11 average or Heat Zone 8 years, and three Heat Zone 9 years, too little to draw definite comparisons, other than they are cooler (Heat Zone 7) or warmer (Heat Zone 9) than our average (Heat Zone 8).

For gardeners, what conclusions can we draw from all this weather data? Looking at the numbers after the season has ended doesn't necessarily help a gardener while it is happening. There is a significant tool gardeners can use in caring for their plants, and few conclusions I can make.

The most important indicator readily available in real time on a day to day basis, is whether the temperature reaches or exceeds 86°, and how often during the growing season. Gardening need not be done on a trial and error basis. We have the information available to us to make better choices.

To download and print out a free weather calendar, go to http://www.srh.noaa.gov/rtimages/ama/2014_Calendar.pdf.

For a printable copy, go to http://www.upsidedownpatiogarden.com/when-to-plant.html, click on the map, copy and paste to your Office program and print.

Rain gages and other official CoCoRaHS weather monitoring equipment is available at http://www.weatheryourway.com/. CoCoRaHS is an acronym for the Community Collaborative Rain, Hail and Snow Network.

I still haven't found a source that reports daily ET rates for our area (evaporation and transpiration). However, ET Gages are available at http://www.weatheryourway.com/cocorahs/etgage.htm for $218.00 plus shipping. Please read the pdf file for operating instructions before ordering to see it this is right for you.