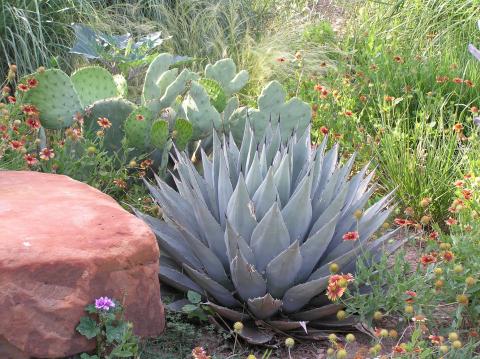 The gardening year in 2013 went the way most years go, two new highs and extreme weather events and series of dry, hot and or cold events. These combined to make the gardening year both challenging and typical, as it usually is. It wasn't the worst year in recent memory, nor was it the best, just different from most that came before it. For this reason, the word of the year is “resilient”.

Instead of heat waves and wild fires, this year's conversation about extremes was moisture based, both frozen moisture, but in quite different forms. Much talked about personally and in the press was the blizzard of February 25th with 19 inches of snow with the year's strongest wind of 75 mph. The hail storm the evening of May 28th was the second extreme weather event that brought much concern both horticultural and monetary to many of us.

The blizzard and hail caused horticultural concern, as they do to gardeners, but the blizzard caused little plant damage. The hail storm was another matter, wiping out a season of bloom for some perennials and delaying the bloom of others. Many trees and shrubs are scarred with gashes and indents that may or may not cause disease or insect problems in the future. A few re-seeding plants that were flowering were greatly battered and did not go on to re-flower and produce seeds. Some plants died; particularly new transplanted and young plants were beaten down or froze out by the hail. Most survived and thrived depending on their degree of care and nutrients. All in all, the plant kingdom weathered these two events with their usual resilience.

January started out cold with New Year's Day reaching a high temperature of 29° and a low of 20°. A good day to spend indoors flipping through paper or digital 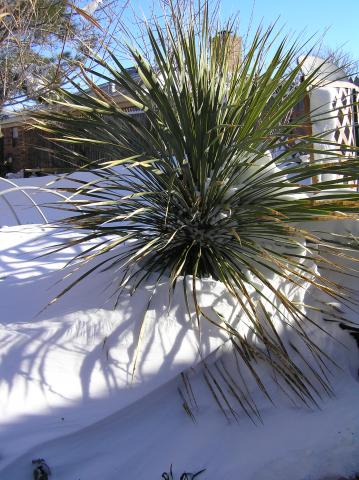 catalogs. By the end of the month, a warming trend was so encouraging, I planted a fresh crop of greens under my row tunnels, followed by onion sets a week later. Despite the snow cover on February 12th and the blizzard of the 25th, these early plantings did very well. Nearly the only effect from the blizzard I could tell was that late winter cleanup in the garden was delayed a few weeks. The nearly 1.5 inches of moisture the snow brought had to last a long time. January was the calmest month of the year, wind speeds averaging only 11.4 mph. 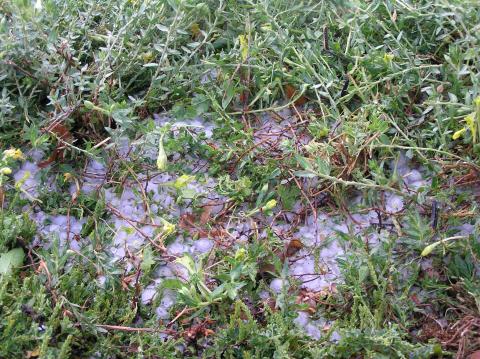 In 2013, the most challenging season was the spring. Plants faced strong constantly alternating warm and cold trends throughout March, April and May. Our last freeze date was May 3rd – not totally unheard of, but quite late, especially when taking into account the hot days between quite strong freezes of April 10th and the 23rd, dropping down to 21 and 20 degrees, respectively. Notable too are the 72 days my garden went without measurable rain (termed at least .01 of an inch), from March 26th to May 9th. Within those 72 days, I experienced 7 days in which a trace of rain was noted in my journal, and one incidence of snow flurries. I recorded no measurable moisture in March and April. I thought this spring difficult. Certainly, if you were one of the many who planted tomatoes and peppers early, it was very difficult indeed. But even waiting until after the average last frost date (around April 20th) wouldn't have been prudent enough. Cloches and frost blankets offer only so much protection for warm season plants raring to grow.

March, April and May contributed a meager 1 inch of rainfall to our yearly total, a dry spring indeed.

But if your vegetable and other plantings survived the erratic temperature seesaw, it took a battering in the hail. Periodic late freezes depleted the supply of tomato and pepper plants (and others) – it looked like another grim year for the farmer's markets, not just in Amarillo area, but throughout the larger region. The timing of planting is crucial and difficult in “normal” years, this spring was a trial of spirit. 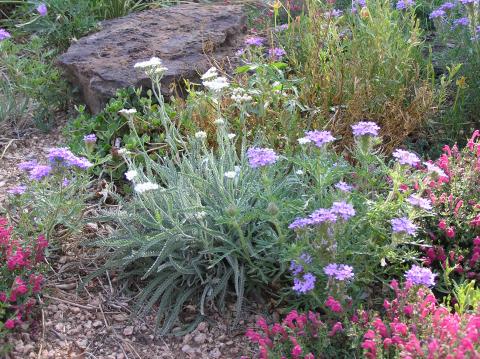 I thought our summer to be nicely average. I don't have a number for the average number of days at or above 100° for our area throughout the years, but Amarillo officially recorded 10 days at 100° or above. May 17th brought our first 100°, with 3 days in June reaching the century mark, one in July and 5 in August. Cooler days are always welcome in the summertime, where “cool” become relative. In June we experienced 12 days under 90°, in July 13 days and in August just 9 days under the hot 90's. Overall, the heat didn't seem so bad, but then the hellish years of 2011 and 2012 are still fresh in my memory.

August was the second calmest month, with the wind averaging 11.9 mph. And as the saying goes, any calm day is a good day. Despite August's heat, I seeded kale, chard and broccoli raab in little trays and kept them in morning sun, closely monitoring the watering, much like one does in spring. This experiment was quite successful. I'll repeat it in the future, adding spinach seedlings along with chard and kale. 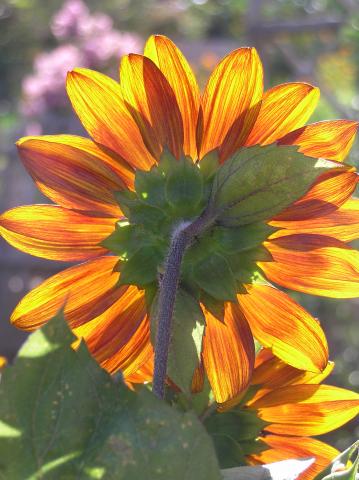 Coming off a hot August, the heat continued into the first 10 days or so of September, delaying my seeding out of greens for the fall and winter garden and planting 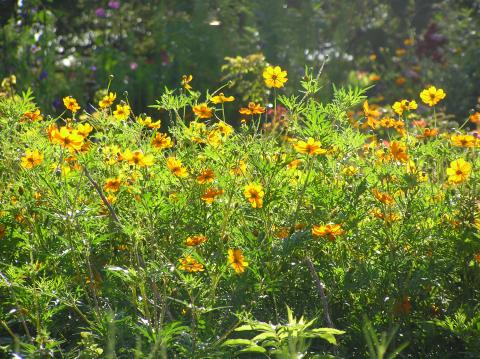 my kale, chard and broccoli raab starts. I was amazed how well the kale, chard and raab responded and was able to start harvesting in October and November. However, I rue that I waited with the others, especially turnips, which I will now always plant closer to September 1st for fall eating.

Plants that were set back by late spring freezes and the hail rebounded with vigor in September, most notably the salvias. This contributed to a beautiful, as usual, fall. A moderate hail event September 16th had no lasting effect other than a ragged appearance to soft leafy plants (such as the chard and kale that went uncovered during the hail).

The first freeze of the fall arrived very near the average date of the first frost, on October 19th. This bookending of spring and fall frost dates contributed to a shorter than average growing season in 2013 much as I consider the two hail storms bookending the minimal seasons of peak appearance in the gardens. Additionally, the severity and duration of the cold in the week preceding Thanksgiving definitively shut down the growing season early, compared to other autumns. 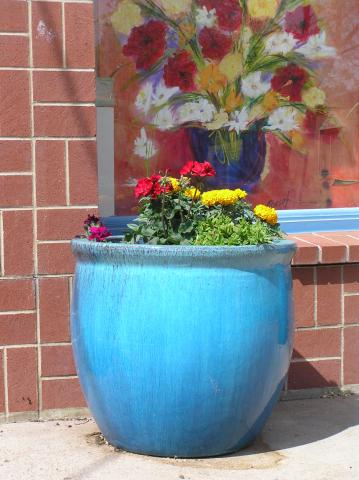 The final four months of the year brought 2.885 inches of precipitation to my landscape, for a total of 12.895 inches for the year, two inches or better less than recorded officially for Amarillo. We had no deluges or great rainfalls in 2013. The most precipitation received was in the blizzard on February 25th amounting to 1.48 inches officially. Next greatest was 1.3 inches in my gauge on July 18th. I noted 22 days where a trace of rain or snow was recorded and 31 days in which I recorded a measurable amount of at least .01 inch or more. We received approximated 32 inches of snow in 2013, with the majority falling during the blizzard.

The highest temperature recorded in 2013 was 105° on June 27th and the lowest was a chilly 3° on December 7th. Amarillo remains comfortably within the USDA Cold Hardiness Zone 7. As far as I could determine, there were two new record high temperatures for specific days, 85° on March 15th and 72° on December 19th. There could have been more but this was all I noted. I doubt that 2013 could be considered either a windy or calm year, certainly falling somewhere in between. However, any letting up of the wind can only be considered a very pleasant occurrence. 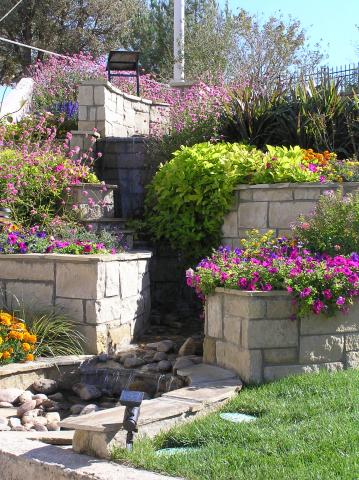 High Country Gardens, the online and print catalog supplier of plants for Western Gardens was resurrected in 2013 after briefly closing the greenhouse. David Salman is back at what he knows and loves best, Chief Horticulturist. Although the Santa Fe location is still closed, gardeners have dried their tears (including myself) and are back ordering plants they alone carry. Hurray for our gardens!

Canyon's Edge Plants, our local supplier of xeric and native plants is gearing up for another great season. Please remember to support our local business. Neal Hinders is a terrific supporter of the Native Plant Society, Amarillo Botanic Gardens and other entities. It's a rare privilege to have a plantsman within our midst.

And happily, after a succession of changes at the top at Amarillo Botanical Gardens, the directors appointed a new Executive Director, Kevin Ball. Kevin Ball is a great choice. After only 6 months, Kevin's enthusiasm, marketing skills and leadership has firmly placed ABG on the path towards growth and greater awareness in the community. Teamed together with Greg Lusk, the Director of Gardens, and all the volunteers, positive changes and new gardens are in store for 2014.

This brings me down to the section composed of what people really want to know – what will 2014 bring? As investment specialists are fond of saying, past performance is no indication of future results. But in the Texas Panhandle, the past is indicative of what the future holds in store. The Texas Panhandle will always have erratic and unpredictable weather, based on its geographic position on the high plains in the rain shadow of the Rocky Mountains.

The Texas Panhandle and surrounding area lies at the point where three climatic regions converge; the continental climate with cold winters and warm/hot summers, the humid sub-tropical climate where winters are warmer and the summers steamy, and semi-arid plains(or steppes) where rapid temperature changes between cold and heat and ever-present winds are the norms. There are no fixed boundaries for this climate regions, but vary as air masses from the Pacific Southwest, Arctic North or Gulf South prevails over the others. Our weather will always be dictated by whatever climate system is dominate at any given period.

Therefore, not being a climatologist, a meteorologist, nor a scientist of any sort, I predict we'll receive less rain than we need, the winter will be colder than we prefer, spring more volatile than is fitting, the summer hotter than we like and the fall as pleasant as we deserve. People and plants are quite resilient and will thrive in whatever the weather will bring.