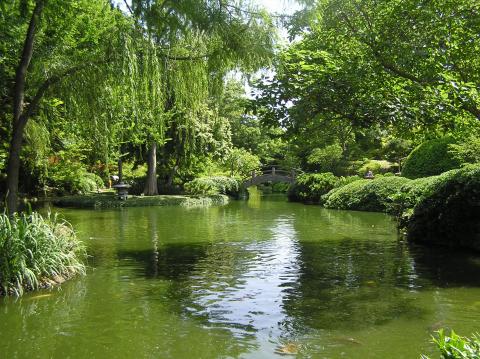 It might seem unusual that my quest to better understand the concept of creating a sense of place for the Texas Panhandle would lead me to the Fort Worth Botanic Garden, the oldest botanic garden in Texas. Created during the Great Depression, expansion and development of the area fulfilled its “dream of an outdoor library of plants.” But it wasn't their Texas Native Forest Boardwalk, the Water Conservation Garden, Trinity Woodlands Area, Rock Springs, the Fuller, Fragrance, Cactus or Trial Gardens, but their Japanese Garden that led me to see how a garden style can so intimately be entwined with displaying a sense of place.

The Japanese garden was certainly not the first themed garden for the Fort Worth Botanic Gardens. On land purchased in 1912 and first called Rock Springs Park (because of the three tributaries of the Clear Fork Trinity River running through the property), the first garden, 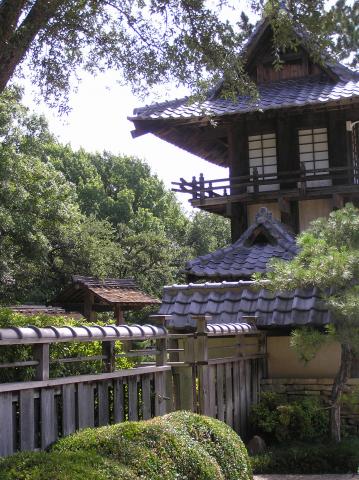 the Rose Garden, designed in the Italian Renaissance style, was completed in 1934. Shortly after, Rock Springs Park was renamed Fort Worth Botanic Garden. Through the years, the gardens expanded on the 110 acre site.

Built at the site of an old gravel pit, construction of the 7.5 acre Japanese Garden began in 1970 and now includes a tea, stroll garden and Karesansui – dry garden, around the centerpiece ponds, lagoons and cascades complete with islands, waterfall and moon bridge. Fort Worth Botanic Garden's Japanese Garden incorporates many of the characteristics of traditional Japanese gardens. Natural, asymmetric outlines, balance between color, shade and light and the placement of water, plant, rock, and architectural elements are combined to form a unified, harmonious and synonymous whole. 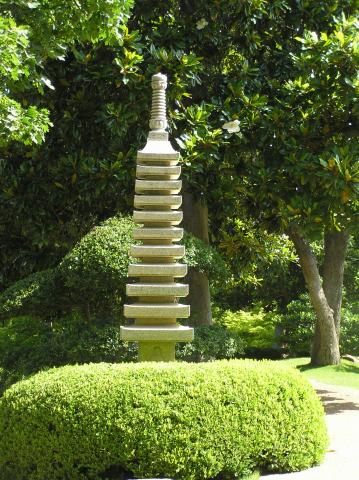 First influenced through interaction with China and Korea during the seventh century, Japanese gardens developed over hundreds of years. Isolated from other outside influences, the Japanese refined the styles and symbols that created their unique sense of place. The style and design of Japanese Gardens is immediately recognizable, whether one views them in person or in picture.

Japanese gardens contain all the elements that contribute to creating a sense of place. One of the first books on Japanese gardening is Sakuteiki, (The Classic of Garden Making) dating back to the eleventh century, attributed to Tachibana no Toshitsuna, Director-General of the Construction Secretariat—he may also have been a designer of gardens. Sakuteiki outlined the main principles of the Japanese garden: “(1) The garden should conform to the topographic characteristics of the site, including the natural flow of water. (2) Elements of a garden can simulate famous scenic spots, a notion also reflected in the poetry of the Heian Period. (3) Gardens should conform to what one recognizes as the Chinese principles of feng shui, playing close attention to directional symbolism and the propitious choice and placing of elements. (4) Gardens should capture the spirit of nature as well as imitate its forms. The text also contains many references to the types of islands, waterfalls, and rock arrangements one might create in a garden, and these references have played a major role in later interpretations of Japanese gardens” (The Japanese Garden, Bowdoin College).

Japanese gardens are as varied as any other garden style. Over a millennium, many elements were used to develop the qualities of serenity, joy, tranquility and introspection 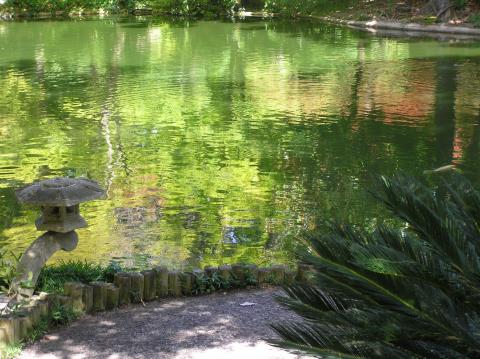 within the five main types of Japanese gardens (pond/stream garden, stroll garden, courtyard garden, dry garden and the tea garden). Elements of Japanese gardens include architecture, bridges, islands, lanterns/basins, pathways/paving materials, stones/rocks, ponds/sand/pebbles, shorelines, streams, flowers/shrubs/trees and waterfalls. It is the choice and combinations of the essential elements and their placement in relationship to each other, fashioned together with the four main principles of the Japanese garden, that coalesce into a Japanese styled garden. Japanese gardens emanate harmony for many reasons, one of them is clearly due to the understanding of their climate and terrain.

Learning from the Past

The American garden style is still in its infancy. But we can help in its growth and development once we, as American gardeners, gain in knowledge and skill of our “topographical place”. Taking a historical viewpoint, American gardeners were first and foremost influenced by European culture, much as Japan was first influenced by China. The Japanese over centuries, revised, changed, adapted and designed a style unique to their culture, climate and environment. A style instantly recognizable as their own. North America was far from being isolated from outside gardening influence, indeed, the formation and growth of our nation parallels the growth of world exploration and trade. 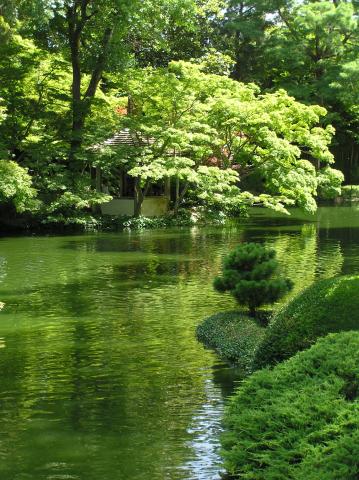 Although the North American continent is much different from the continent of Europe, our choice of plants and materials, and their relationship to each other, influenced by Western culture, are adopted from Europe more so than being adapted to our North American climate and environment. Nothing illustrates this more clearly than what has become known as the typical American garden – a uniform lawn, a tree to each side of the home, and a row of shrubs across the front, and none of these plants native to the area, or perhaps not even the continent.

Until we wed our own culture with our climate and environment, recognize our own essential elements coupled with plants that reflect and capture the spirit of our natural world, our gardening identity won't progress much past the crawling stage. Will we be able to tour botanic gardens or flip through magazines or digital photos and recognize and exalt in the American Garden as we do with other cultural garden styles?

Creating a Sense of Place

We don't have to re-invent the wheel. Just as the Japanese borrowed from the Chinese, we can continue to borrow, as well, from different cultures. For example, the four main principles of garden design outlined in Sakuteiki are relevant principles for us today in creating a sense of place: