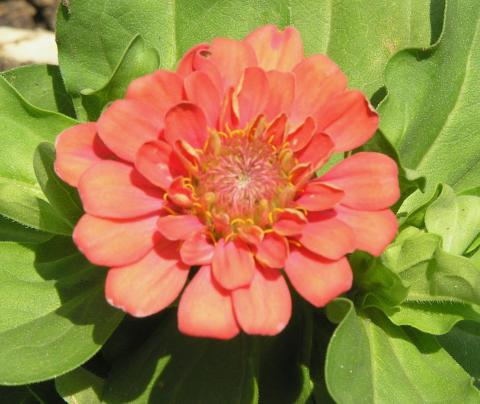 After the spring cleanup and all thoughts of frosts have passed (hopefully), gardeners perennially turn to annuals. Whether for a bed devoted to season long, non-stop color or to fill in vacancies until perennials spread and mature, annual flowers provide a spectacular service.

There are annuals in just about every plant family and most genera, from all continents but the Antarctic, all the way up and down the alphabet from A to Z. Although many of the flowers favored by gardeners are exotic, that is, native to areas across the oceans, there are several New World perennials we have grown to love and cherish each summer in their highly crossed, selected and hybridized form. 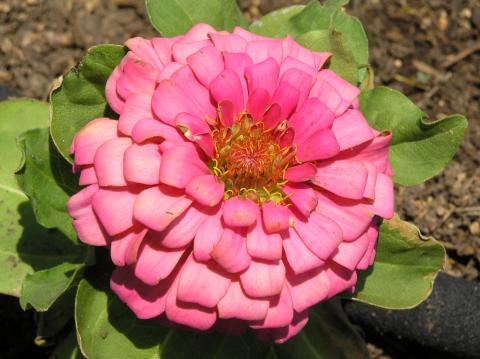 One such American (North, South and Central American) annual is the zinnia.

We love zinnias for their wide range of color, size and habits. Late last summer I discovered I was in love with zinnias, but it was too late to plant seeds or buy plants. Luckily, in a pie slice bed across from the Xeriscape Garden at Amarillo Botanical Gardens, a beautiful mix of zinnias was thriving. Each week, I would stop to admire their cheery, bright blooms. As winter turned to spring and warmed into summer, my love of zinnias hasn't diminished.

I use the term “annual” in the sense that most people use it – plants that need to be planted afresh each year. These plants are distant cousins to the original “discovered” plants centuries ago. Each of them has their own fascinating history.

In the case of zinnias, they were first noted by the Spanish in Mexico during their conquest of the Aztecs in the early sixteenth century. But it wasn't love at first sight, as it was with many plants officers and merchants brought back to Europe. The Aztec's name for zinnias was “eyesore” which the Spanish called mal de ojos, because of their ever-present, small and dingy purple or dull yellow blossoms. The New World offered up to the Old World not gold, but botanic treasures, only zinnia's weedy appearance didn't cause anyone to feel rich for several more centuries. 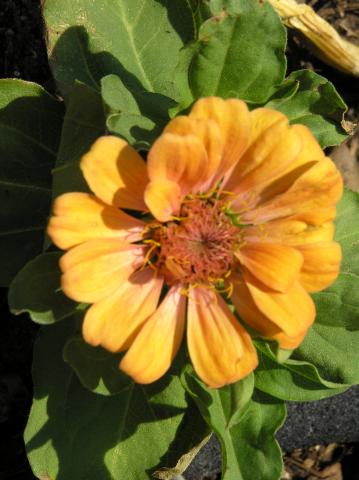 As new plants flooded in from around the world, botany flourished. Many of the educated across Europe took up the study of botany either outright or as a sideline. Dr. Gottfried Zinn, a German doctor at the Gottingen University who adopted this trendy hobby, was sent an envelope of seeds by the German Ambassador to Mexico in 1750. Though dying young at the age of 32, in addition to becoming the director of the botanic garden at the University of Gottingen, writing an important work on the anatomy of the eye, and a description of the flora around Gottingen, he introduced “eyesore” or mal de ojos, to a few gardens in Europe. I can only think the association with the name mal de ojos by the ambassador in Mexico and his doctor-friend who specialized in the eye was fortuitous for us today.

More than a hundred years further, in the 1880's, French horticulturists began to experiment with zinnias, named in Dr. Zinn's honor by Linnaeus. Zinnia haageana, Z. peruviana and Z. elegans are three (of nearly 20) zinnia species that provided the best results. As with most new flower introductions, zinnias became the rage, especially in England, where gardeners where keen on growing anything exotic. Due to the zinnia's providence, English gardeners had a hard time of it, lamenting their sickly (at best) plants looked nothing like the robust specimens growing in Italian gardens. Being native to the hot, sunny and drier climates of SW United States, Mexico and Central America, zinnias faired none too well in Britain's cool and cloudy climate.

Finally, at this point, zinnias caught the attention of American gardeners and growers. Luther Burbank and later, his head gardener, William Henderson, took up zinnia research, followed by William Atlee Burpee, Burbank's cousin, after purchasing the Henderson Seed Company. W. Atlee and his son, David Burpee, lead the field in hybridization. “A significant horticultural innovation occurred in the 1940s when Burpee's experimental breeders began to "shock" the chromosome structures of flowers with tiny amounts of colchicine, a poisonous alkaloid obtained from the autumn crocus, and thereby empowered the plants to emerge in dramatic new forms. . . . Burpee breeders had basically invented marigolds and zinnias from seeds of Central American wildflowers” (W. Atlee Burpee and Company History). It took a few decades of breeding, but eventually Burpee and Company developed the many faces of zinnia – the button zinnias, giant, and dahlia sized, cactus, pompom, mini and the cut flower zinnias.

Whether your zinnias come from Burpee's or another plant breeder, zinnias are ideally suited to our hot, dry and sunny days, even though they've lost some of their xeric traits. The one rub against zinnias is their tendency to mildew. Some of the newer selections offer mildew resistance, such as the Purple Prince, Pinwheel and the Oklahoma Mix Series.

Zinnias prefer well drained and well composted soil. Keep them dead headed for continuous blooms. Many of the seeds from zinnias will grow plants true to form, so save your seeds for next year's garden. 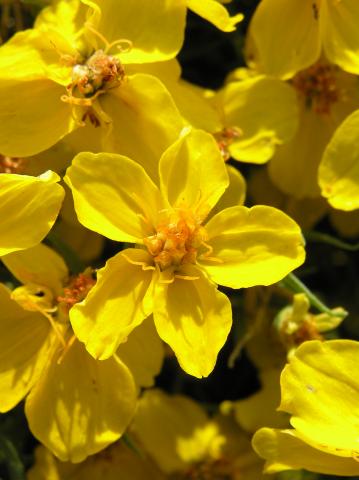 Histories of wildflowers from nature to our present gardens present fascinating stories, especially those of American natives. Their journey from shore to shore and back again may not be as complicated as the zinnia, but provides an appreciation for the work and labors of many generations of plant lovers over the centuries. And it gives hope that sometime in the future, our local wildflowers will find fame and fortune across the world. After all, all our garden plants can trace their lineage back to wildflowers somewhere.

The zinnias in this story may not be native to the Texas Panhandle, but Zinnia grandiflora, our prairie zinnia also known as plains or Rocky Mountain zinnia, grows locally and throughout the southwest. Not a “eyesore” in my garden, prairie zinnia's golden flowers blooms profusely from late spring into late fall. Who knows the wonders that await.