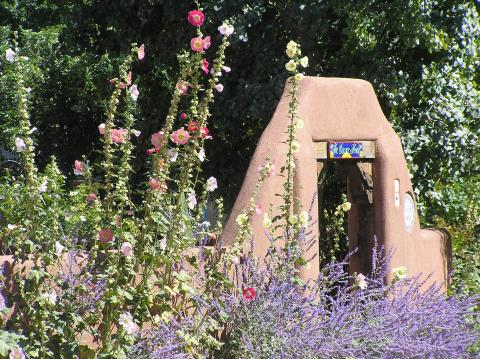 Quietly nestled among the narrow, winding streets of East Alameda and Canyon Road not far from the Santa Fe River, a four acre garden displays some of the best features drawn together from English and xeriscape garden styles. The Spanish word for homeland best sums up the conjunction of the two 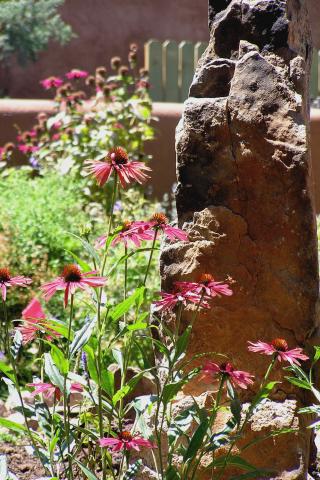 diverse gardening cultures, English and water-thrifty Southwestern, into a welcome respite from the labors of the day and the New Mexican sun. La Querencia--The Beloved Place, thrives amid drought and regulated water allotments hidden from view of the unassuming Santa Fe tourist, unknowing that a sculpture garden can be partially viewed from the street above her gardens.

La Querencia is the work of Elspeth Grant Bobbs, and English transplant with an American father and English mother, a legend in her own time. Due to early deafness in her twenties, Elspeth traveled to the United States to escape World War II air raids. An aspiring artist, she first visited Santa Fe in 1943. Alternating between Santa Fe and Carmel, CA, for a number of years, Elspeth and her husband Howard felt the call in Santa Fe and settled in. By 1967, they bought a 4.3 acre lot with a thriving population of bind weed and an old orchard.

A Leap of Faith 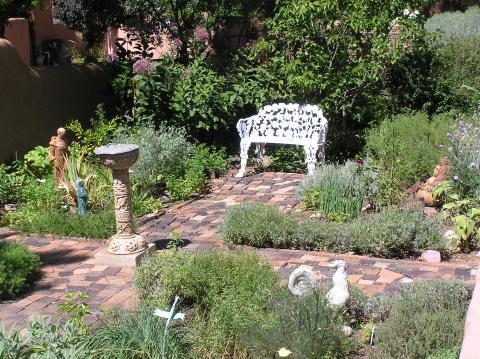 Elspeth first began gardening with herbs, the only plants she could find to thrive in the calcareous, alkaline soil. As the years passed by and more bind weed was conquered, Elspeth gardened as most do, replicating landscapes familiar to them. “They added lawns and a classic parterre with symmetrical planting areas. The first bed of roses wilted and then died. She fell so hard for the plants pictured in catalogs that her garden-club buddies called her “Gullible Elspeth.” The upside of failure? “I learned a lot,” she says.” (The Secret Garden, By Kate Nelson, New Mexican Magazine, April, 2015.) 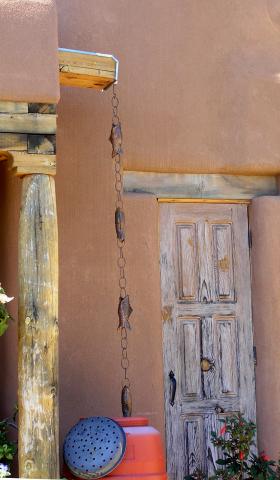 Santa Fe's history extends back to around 900 A.D. when the earliest settlers formed a small community around what is today called The Plaza, receiving its water from the Santa Fe River. As time passed and the region's population increased, flow from the Santa Fe river became seasonal in the eighteenth century. Today, the river is an intermittent stream that was designated America's most endangered river in 2007 by the conservation group, American Rivers. Thus continued a long series of water woes for the regions inhabitants.

Having visited Santa Fe a moderate amount, it was surprising to see this large a garden amid "artist's row" near Canyon Road, a most valuable piece of property. Owning this property for over fifty years also brought the benefit of two wells to Mrs. Bobbs, making this garden possible under the current water policies. Irrigation with water captured in rain barrels and a cistern supplements water from the wells. When faced with drought, 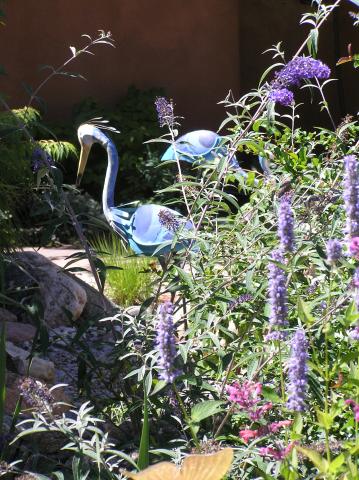 Elspeth recognized the folly of continuing some of the English traditions. The water-thirsty lawn was the first to go, creating a labyrinth in its stead.

In developing the gardens, Elspeth kept digging up bindweed. Along the way, she embraced organic techniques and rejected pesticides. “So I spent hours digging it up. By constant additions of organic matter to the soil and perpetual vigilance, I think I have the bindweed sulking, if not conquered.” (The Secret Garden.) Water thrifty plants replaced plants that required more moisture than is present to give.

Mrs. Bobbs' love of herbs is evident throughout her landscape. “There are the Medicinal, Our Lady, Culinary and Love Gardens. Her pet is the Love Garden that houses aphrodisiac plants such as: onion, clove pink, fringed sage brush, lavender bergamot, and basil to name a few.” (Elspeth Bobbs, For the Love of an Herb, Carole Langrall, November, 2011.)

A large vegetable garden supports the table for Mrs. Bobbs, her daughter who lives on site, and staff. Excess vegetables are given to the Kitchen Angels, a non-profit group that provides free, nutritious meals to home bound people, just one of Elspeth's many philanthropic activities. 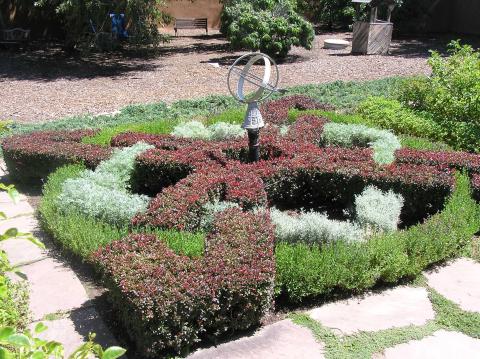 Besides the herb gardens and vegetable garden, over 20 themed gardens comprise La Querencia. Several of the gardens were developed from A.E. Houseman verses, a favorite poet of Elspeth. Others are gardens of whimsy, such as the garden based on the children's book, Wind in the Willows and a miniature train running through a garden that represents the United States. There's the Medieval Garden featuring King Arthur's sword in a stone, and an homage to the religions of the world. Throughout the premises, scented roses, hollyhocks, morning glories and sunflowers shine as some of Mrs. Bobbs' favorite plants. My favorite example of the wedding of the traditional English garden in the challenging Southwest climate is the Knot Garden, substituting red barberry, germander, and artemisia for the typical box or laurel. 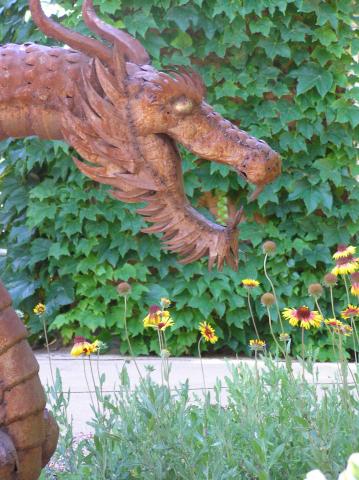 Elspeth Bobbs made her home in Santa Fe, but more importantly, she embraced her adopted country by adapting her gardening heritage to a much different climate and soil and in the process she became a Living Treasure in Santa Fe.  At 95, visitors to her garden are fewer, but still valued. She takes the opportunity to greet them as they begin to tour, and then again as they finish. Though deaf, she can hear the delight and appreciation in the visitors' manner and deportment.

Mrs. Bobbs still walks through her artistic creation of over half a century several times a day, monitoring its progress and directing what new themes and plants to be implemented by those who now do most of the work. What better avocation than to make something beautiful, something of one's tradition, and something of relevancy to a changing world. What better life's work is there to create one's own garden, share, and live a life long enough to know others enjoy it too. 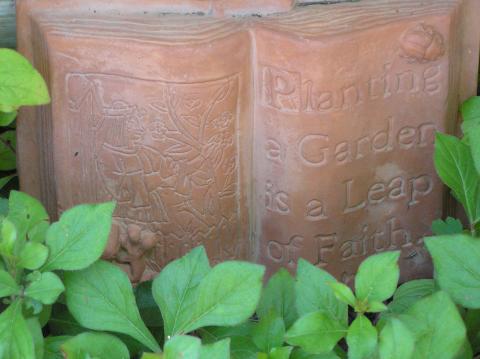 “And since to look at things in bloom
fifty springs are little room.
About the woodlands I will go
To see the cherry hung with snow.”

A. E. Housman, from Loveliest of Trees, The Cherry Now