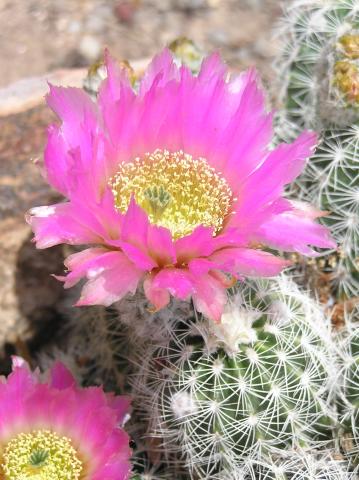 It's hard to love a plant that's poised for attack. But hold the disparaging remarks about cactus, please. Thrust into harsh environments and graced with some of the world's most beautiful flowers, cacti did what they could to survive. Beneath the spiny, prickly, thorny, bristly and hurtful exterior, on some, spines so thick they looks more like an inverse pincushion, lies the heart of succulence. Cacti are loved world wide and are among the most collected of plants. It is rare to find a plant person without a potted cactus on their windowsill at least part of their life. 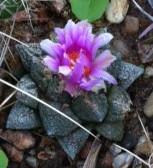 Cacti are natives to the Americas, believed to have originated in South America with the majority of the species inhabiting regions north and south of the hot zone, the moist, humid tropics surrounding the equator. A few forest-type cacti inhabit Central America. It is thought that cacti found outside of the Americas have been introduced by birds, wind or collectors over the centuries. However, one genus, Rhipsalis, has been found growing naturally outside the Americas in KwaZulu-Natal and the Eastern Cape of South Africa.

Cactaceae, the cactus family, includes anywhere from 1500 to 1800 species in about 100 to 122 genera, depending on one's source of information. They are extremely diverse in size and appearance, from the tiny button cactus, Epithelantha bokei, found in the Big Bend region to the giant saguaro, Carnegiea gigantea, the indicator plant of the Sonoran Desert. Cacti are home in the America's arid and semi arid areas that have three climatic seasons: the hot and humid season at the beginning of the year, usually February to June, when the cacti grow. The dry and hot season, July to September, when they flower and bear fruit. And the season of rest, corresponding to our fall and winter. During the period of rest, the weather turns cold, even below freezing. They've 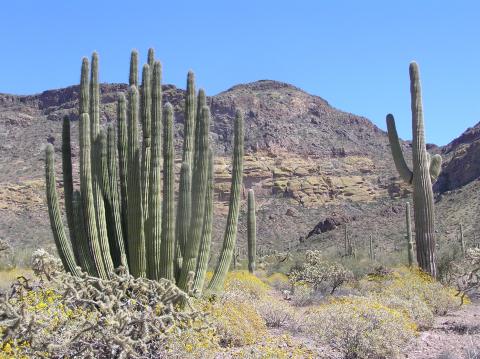 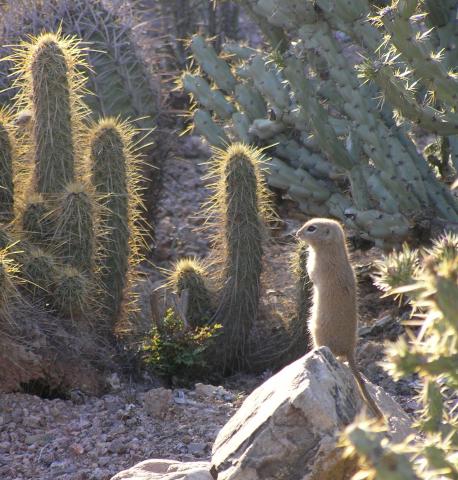 In North America, Mexico contains the largest number of cacti taxa: 563 species and 48 genera, approximately twice the number of taxa as in the United States. Arizona boasts the highest number of the states with 170 taxa (70 species and 60 varieties) and Texas with 136 taxa comprised of 95 species and 41 varieties. Most of our Texas cacti are native to the Trans-Pecos region of the Chihuahuan Desert. As research and exploration continue, these numbers will change.

In fact, it is difficult to be absolute when defining and describing cactus as more and more studies are published. For instance, “cacti do not have leaves” – not true, several genus of cacti do have leaves, particularly in the tropical regions. “All cactus are rooted to the ground” – untrue, as there are forest cerei and epiphetic cacti that attach themselves on rocks and trees by their roots, but are not parasitic, they do not obtain food directly from the plant. “All cacti have spines”, again not true, there are spineless cacti, however all cacti have areoles.

My favorite misconception, “cacti do not need water since they grow in deserts” is most certainly false. Although found primarily in arid and semi-arid regions, 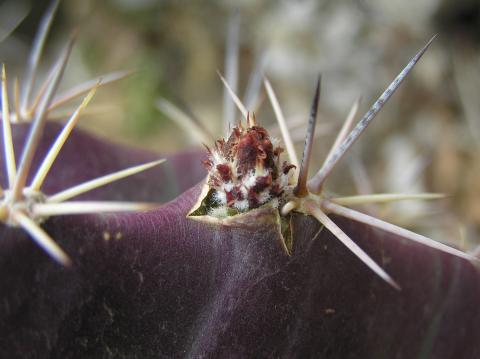 perhaps it is the lack of competition from more water-thirsty plants that left this land free for them to evolve and survive. Cacti are designed to absorb and store water quickly and for long periods of time. Spines congregate moisture from the air for it to drip to the ground to be absorbed by long spread-out, shallow roots, capturing all available drops.

One more misconception, “the plural of cactus is cacti.” Yes and no. It is acceptable to use cactus, cacti and cactuses when referring to the plural. Even the above statement about replicating the cactus growing conditions for best results is not totally true! Studies have shown home grown cactus from seeds in other climates, Europe, for instance, where there is great interest in all plants not European, thrived well in rich soil with ample water and humidity. 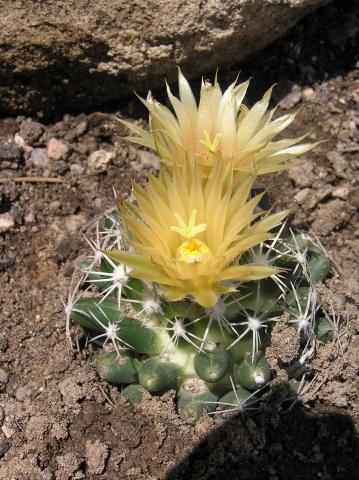 Not all succulents are cacti, but all cacti are succulents -- again, not true. There are a few genera within the cactus family that store so little water they are not considered succulent. The succulent stem, either globose or columnar are built for water storage and minimum evaporation, ribbed or tuberculate (with round nodule or small eminence, as in Mammillaria, and our Panhandle native, Coryphantha missouriensis, the nipple cactus). The ribs and tubercles expand and contract with water availability. The more pronounced the grooves and tubercles, the less water the stem is holding. Likewise, the ribs are well rounded with ample moisture. 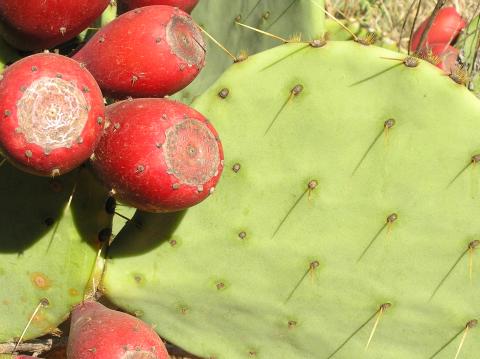 Spines, always emerging from areoles (photo right), are modified leaves, providing protection from herbivores. Spines also provide shading from the sun and deflection of wind to reduce evaporation even further. Spines vary greatly in color, size and shape. Spines sometimes appear as woolly hair, offering the added protection against nighttime cold, or in combination with spines found in mostly columnar-shaped cacti found in high altitudes from Peru to Bolivia and Argentina, the Oreocereus genus.

If the shape and form doesn't attract, it is certainly their flowers. Cactus have the most beautiful flowers in the world. In some plants, the flowers are even bigger than the plant itself. Cacti flower every year, after reaching maturity, some species several times a year, including the Thelocactus bicolor, var. bicolor, the Glory of Texas native to Presidio, Brewster and Starr counties near Big Bend National Park. One enthusiastic reference mentioned the similarity of the cholla cactus to early roses in appeal – both have thorny canes and a single period of flowering. Driving a stretch of I-40 between Amarillo and Santa Fe one June, I noticed acres of cane cholla, Opuntia imbricata, in full rose-pink bloom – quite a sight.

Growing cactus is similar to growing agave, lean gritty mineralized soil with good drainage and 6 to 8 hours of sunlight for the best blooms. Afternoon shade benefits most plants, but is not required. Cacti prefer acidic water to our alkaline city water, rain water is the best. De-chlorinate a 5 gallon pail of city water by letting it sit in the sun for a day or two, adding one tablespoon of white vinegar or citrus acid to lower the pH if rainwater is not available.

Spare the water in fall and winter for better survival or mound the plant to increase soil drainage.

The large saguaro and organpipe cactus (pictured above right) are not cold hardy in the Texas Panhandle. The largest cacti that are cold hardy this far north are some of the opuntias, prickly pear cacti,  the cylindropuntias, tree chollas, and Echinocereus triglochidiatus, claret cup cactus. Sone of the most colorful are the rainbow cactus, both because of their flowers and their succulent stem or column.

Unfortunately, our area is too cold for the large barrel cactus. However, two Echinocactus, E. texensis, the horse crippler, and E. horizonthalonius, the Texas blue barrel cactus (pictured at the right) will winter over, but are not true barrel cactus. Ferocactus hamatacanthus var hamatacanthus, a true barrel cactus and native to the Big Bend region is said to inhabit elevations up to 6000 and sometimes 7500 ft. That could qualify survival in the Texas Panhandle, depending on the individual specimen's providence and soil drainage (quite sharp, I'd image). 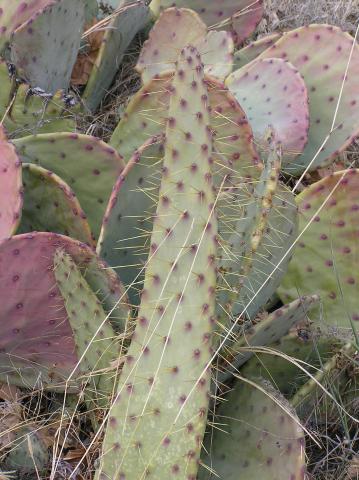 Below is a list of cacti I believe are reliably cold hardy for Amarillo, or down to zero degrees F. Many of these will survive colder temperatures. Populations of Opuntia fragilis grow natively in several locations in Wisconsin on rock outcrops and sandy soils. I am sure this is not a complete list of cold hardy 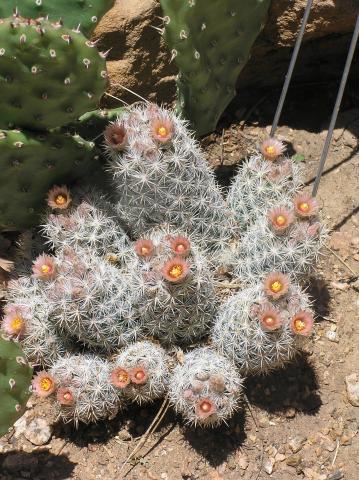 cacti for the Texas Panhandle. 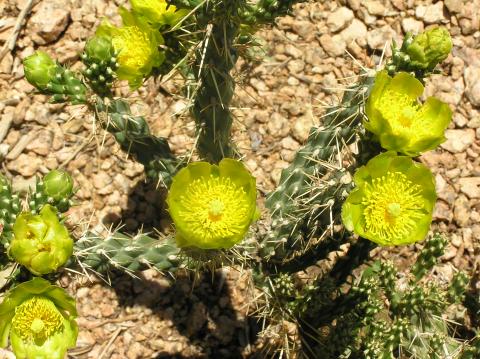 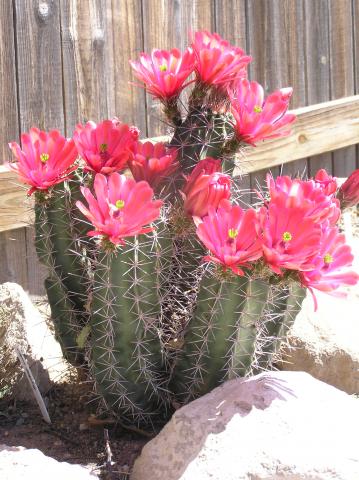 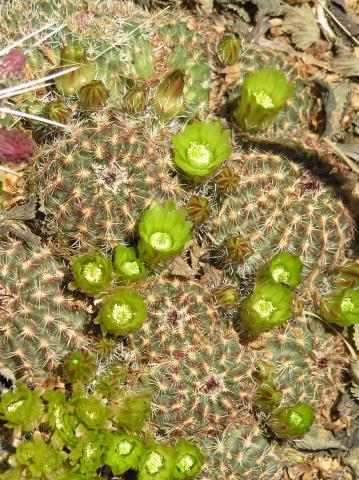 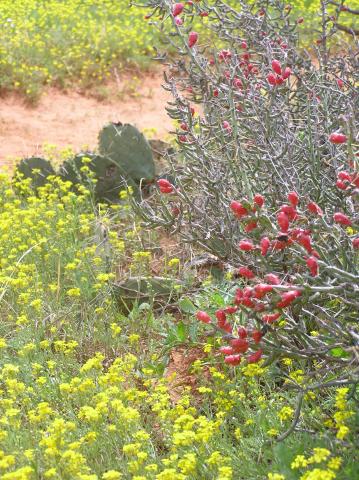 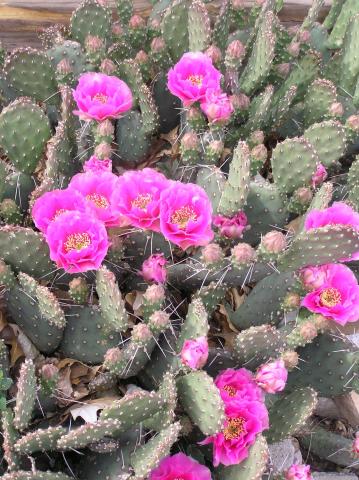 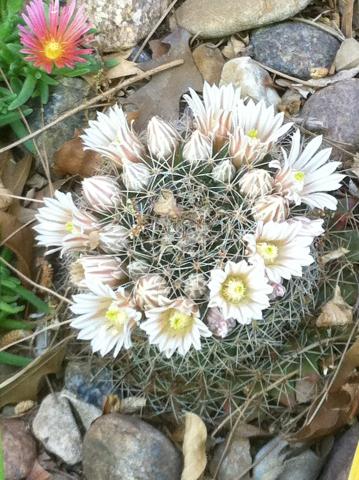